Petr Hora Hořejš, Czech publicist, screenwriter, writer, the author of many parts of the historical cycle Toulky českou minulostí (Wandering through the Czech Past - from 1979), wrote about the ensemble Chaire:

„Chaire!” old, but in Greece still used greeting: „Good to see you!” Chaire was a daughter of Eros and Psyche, an ancient mythological being and nowadays still remains a synonym for joy, a symbol of balance, tranquility and happiness. This expression, little known to Czech people, has been used to name a unique ensemble of historical musical instruments, thus with repertoire facing the past: gothic, renaissance and baroque music but with its art form fully open to present. They give out happiness and also believe that they not only encourage their audience, but also heal them. If not literally, they certainly offer comfort and peace. The ensemble’s sound leans on a unique ancient instrument rarely to be heard: the antique lyre.

Chaire, special with both their musical style and repertoire, is nowadays renown both home and abroad (in Austria, Germany, France, Italy, Belgium, etc.), has published several albums, often with beautiful and poetical titles such as Songs Recalling Former Times, I Dance, I Sing and Songs of Old Europe.

Chaire is an ensemble not too big and flashy, it started in 1999 in Příbram but from the beginning it keeps its lovely but sometimes noble foundation in gentle and touching anonymous, spiritual and folk music, both Czech and European. Soulful form of the music is also given by the fact that Chaire is led by a very special personality: its founder, a universal expert in old ancient musical parts and their seeker, an excellent multi instrumentalist and a sensitive arranger Josef Krček. 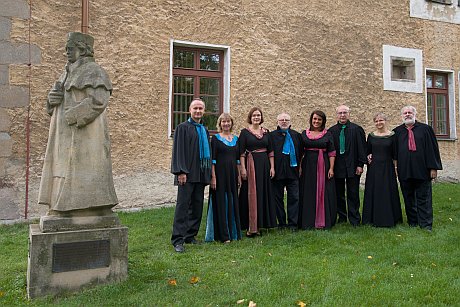